$1.9 Billion I-405 Expansion in Orange County Kicks Off 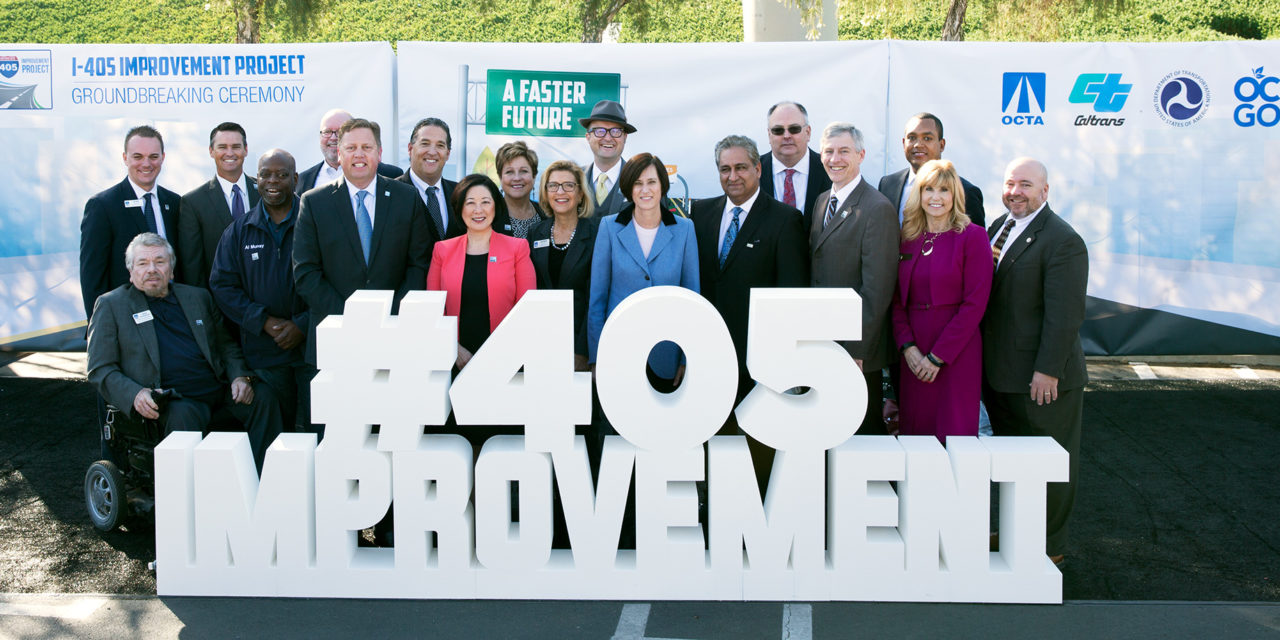 ORANGE – An innovative project aimed at speeding up commutes on the nation’s busiest stretch of highway started today as officials gathered to break ground on the I-405 Improvement Project, which targets a 16-mile stretch of freeway between Costa Mesa and the Los Angeles County line.

The $1.9 billion highway project, the largest under construction in California, is being led by the Orange County Transportation Authority, in partnership with Caltrans. The project adds one regular lane in each direction, between Euclid Street and I-605, as promised to voters through Measure M, Orange County’s half-cent sales tax for transportation improvements. The project also adds a second lane in each direction, which combined with the existing carpool lanes, will create the 405 Express Lanes.

“I’m excited to see this much-anticipated project get underway and am looking forward to it speeding up commutes for all who travel this section of the 405,” said OCTA Chair Lisa Bartlett, also Orange County’s Fifth District Supervisor. “The project is crucial for much-needed congestion relief as employment, population and housing continue to grow in Southern California.”
In addition to constructing the new lanes, the project will build, widen or replace more than 18 bridges, and improve freeway access and traffic on local streets. All this work is critical to accommodate expected growth in Orange County and throughout the region. Traffic on I-405 is anticipated to grow 30 percent by 2040.

“This project demonstrates how strong partnerships between Caltrans, the business community, and local and regional agencies can result in viable solutions to some of the state’s most significant congestion problems,” said Caltrans Director Malcolm Dougherty. “Generations of drivers will benefit from new Express Lanes, which moves more people through the corridor faster, and means less time looking at brake lights and more time where it matters.”

“The project is designed to provide options and reliability for drivers and enhance local streets for residents, pedestrians and bicyclists, which is creating what is truly the freeway of the future,” said OCTA CEO Darrell Johnson. “After 15 years of planning to reach this point, I want to thank the residents and cities, as well as all the local, state and federal officials who have had tremendous input into shaping the I-405 improvements.”

A significant project benefit is reducing the time drivers will be sitting in traffic. Projections show that without these improvements, by 2040 it would take more than two hours to travel this 16-mile stretch, but with the improvements travel times are estimated to be reduced to about 30 minutes in the regular lanes and about 15 minutes if a driver chooses to take the 405 Express Lanes.
The I-405 Improvement Project, set to be completed in 2023, is being funded with a combination of local, state and federal funds, including a $629 million federal Transportation Infrastructure Finance and Innovation Act (TIFIA) loan. The federal loan will save taxpayers approximately $300 million compared to traditional financing methods.

OC 405 Partners, a team of firms led by OHL USA, Inc. and Astaldi Construction Corporation, is designing and constructing the project, the largest in OCTA’s history.