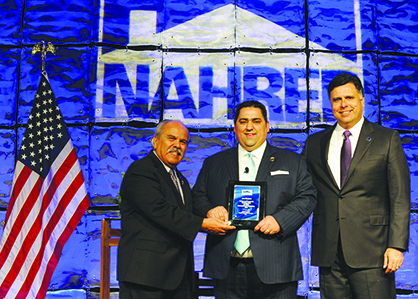 Juan Martinez, broker-owner of Las Vegas-based Century 21 Martinez & Associates, became the tenth person this week to hold the office of president of the National Association of Hispanic Real Estate Professionals. Martinez was installed as president at a gala celebration this week at the Four Seasons Hotel In Washington D.C., an event that culminated NAHREP’s annual legislative conference. He succeeds outgoing President Gerardo “Jerry” Ascencio.

Jason Madiedo, a three-term national board member and the third lender to head the association, succeeds Martinez as president-elect in 2014. The pair will serve one-year terms in these roles.

Martinez is the number-one Hispanic agent in Nevada closing more than 500 transactions per year and the number-one Hispanic agent in the country. He was also named as the 13th overall team nationwide as named by the 2012 Wall Street Journal Real Trends Report. In 2012, Martinez also topped the list of the highest producing Latino agents in the nation as named by NAHREP’s Top 250 Latino Real Estate Agents in the nation.

Martinez is also the former president of NAHREP Nevada, which under his leadership became the first NAHREP chapter in the country to exceed 1300 members. He has served on NAHREP’s national board since 2010, is the national membership committee chair and has spearheaded the association’s mentor program. Most recently he was NAHREP’s president-elect.