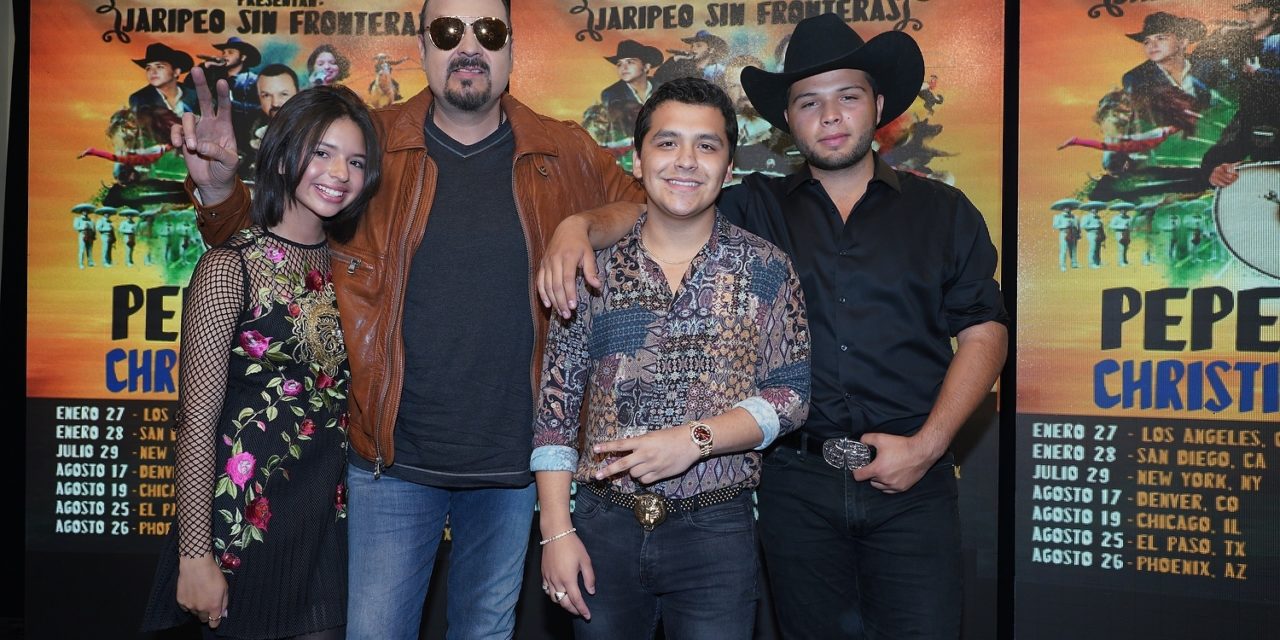 TICKETS GO ON SALE FOR 14 ADDITIONAL MARKETS ON THURSDAY, JANUARY 18 @ 10AM

LOS ANGELES, Calif., Jan., 10, 2018 – Nine Grammy-winning Pepe Aguilar & his family along with special guest Christian Nodal will launch JARIPEO SIN FRONTERAS, a revival of the legendary Aguilar family’s touring tradition of jaripeo, a music and equestrian extravaganza combined with rodeo, it was announced today by the artists during a morning press conference at Staples Center.  Produced by CMN Events and OCESA-Seitrack, the tour kicks off January 27 at the Los Angeles Staples Center and January 28 at San Diego’s Viejas Arena and continues through 14 additional major markets including New York, Chicago, Houston and Dallas (see itinerary below). Tickets for the additional 14 shows go on presale January 17 @ 10:00am and public on sale Thursday, January 18 @ 10:00am.

JARIPEO SIN FRONTERAS is a mega show featuring Pepe Aguilar’s performance on horseback for the first time in two decades, as well as Mariachi star Christian Nodal. Following in his father’s footsteps, Pepe will take the third generation of Aguilars on the road: his children, two time Latin Grammy nominee Leonardo Aguilar and the beautiful and charismatic Angela Aguilar. Highly trained horses; champion bulls from the American rodeo; charros and cowboys in fierce competition; American clowns risking their lives with bulls, the elegance of the Charro tradition with Tomás Garcilazo, animal comedy with «Whiplash» the cowboy monkey, all this framed by the music of Mariachi “El Zacatecano” and Banda Azul Tequila and today’s production technologies create a new concept that will be identified as the Aguilar family of 2018.  «This is jaripeo 2.0,” said Pepe Aguilar. Aguilar made his performance debut at Madison Square Garden at the age of 3 performing on horseback with his father Antonio Aguilar who, with his family, toured the entire American continent with the Espectáculo Ecuestre Internacional and Rodeo Show.  It was the first equestrian show in the history of Latin show business, built around various life stock disciplines with horses, bulls, buffalos, monkey’s, and more.  “It was like a Ringling Brothers Mexican Style.  He even had folkloric ballet.”  It was one of the most successful shows of the time.  Don Antonio, Señora Flor Silvestre (both parents were acclaimed actors) along with little Toño and Pepe Aguilar changed the direction of Mexican music forever and became a standard by which the genre was judged.

“My father’s career was a great inspiration to me,” says Pepe.   “Antonio Aguilar risked everything to dignify Mexican music in countries that were not his.»

Pepe Aguilar went on to become one of the most important  performers/producers/songwriters in Latin music, selling more than 12 million albums, earning 15 #1 records and numerous awards including four Grammys and four Latin Grammys and a Star on the Hollywood Walk of Fame, next to his father.  He has collaborated with artists such as will.i.am and Julieta Venegas.   Aguilar picked this moment to reclaim the traditions of jaripeo for himself, his family and his fans.

As a 1 time National and 5-time state charro champion, Aguilar has had this in his heart forever. “My family and I have that same feeling of pride around our traditions that my father had.  It’s mine and it comes out of conviction and a place of being completely convinced of what I’m doing. And I have rights to the tradition.  This is what I was born doing, and what I want to take to the next level,” he said.

The young star Christian Nodal has managed to win a large audience with his fusion of mariachi and norteño.  His international hit «Adiós Amor», which won “Favorite Song” at the Latin American Music Awards, reached No. 1 on Billboard’s “Regional Mexican Songs” airplay chart as did his other hit «Probablemente», featuring David Bisbal.