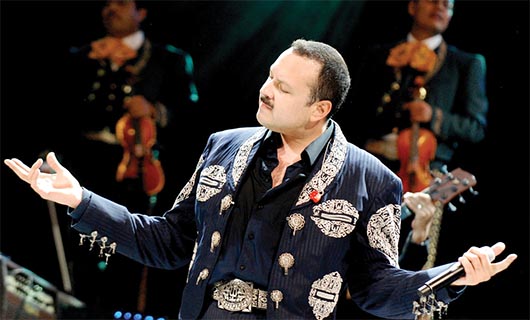 The album Pepe Aguilar MTV Unplugged was certified PLATINUM for selling more than 60,000 physical copies in Mexico, just three months after its release. The artist received the award on January 22 during his Sold Out show at Palenque de León, with which officially kicked off his 2015 tour.

Pepe Aguilar MTV Unplugged was released last October 21 debuting at #1 on the MixUp sales chart nationwide and currently occupying the Top 10. On the iTunes charts the album debuted #1 and remained 7 consecutive days at that spot, as of this date it remains Top 10 of the Latin Pop chart. Pepe Aguilar MTV Unplugged was certified gold for selling over 30,000 copies just a few days after its release.

The album was produced by Meme del Real (Café Tacvba) and is made up by 13 outstanding tracks including two unreleased songs, some of Pepe’s biggest hits, several Mexican classics and rock songs remade with the Unplugged way. Saul Hernandez, Miguel Bosé, Natalia Lafourcade, Reyli, Angela and Leonardo Aguilar, Amandititita and The Marisoul (vocalist of Santa Cecilia) are among the artists that participated in this production.

On another note, and due to the overwhelming success for the Palenque de León that will took place on January 22, Pepe Aguilar has announced a new date for February

Last November, Pepe Aguilar won a Latin Grammy for his album Lastima que Sean Ajenas (released in 2013). The same production is nominated for a Grammy in the category of Best Regional Mexican Music Album. The Grammy Awards will take place on February 9 in Los Angeles, California.