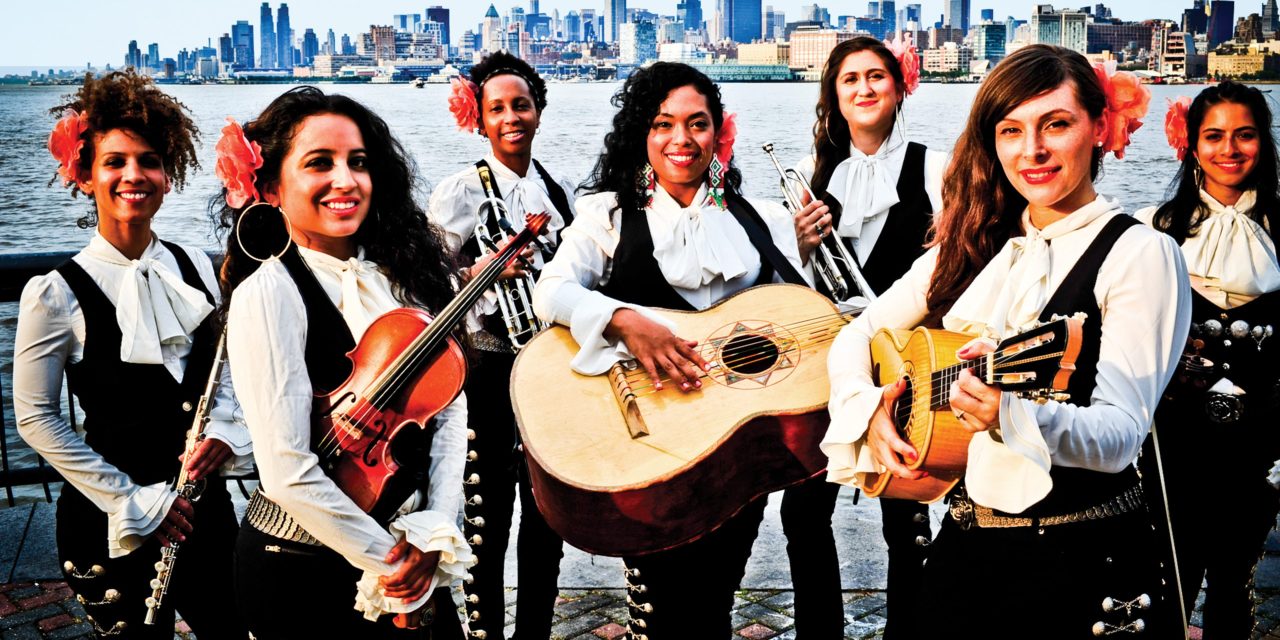 The bilingual Chicano band, Quetzal has been mixing jazz, R&B, and rock for over 20 years, using their art to spread positive social change and awareness. The band joins a long lineage of Chicano musicians to find widespread success in America. Their danceable rhythms come with compelling lyrics and stories about overcoming struggles, inspired by the people and neighborhoods of East Los Angeles. Quetzal contributed to the formation of Artivist Entertainment, which fosters art that promotes positive social change.

NPR speaks to the importance of Quetzal in modern Chicano music, “Much of the current revival of son jarocho can be traced to Quetzal’s history of playing the music when few others bothered. Quetzal pulls off its mission with inspiring lyrics and gorgeous, expert musicianship.  On top of it all, [the band] guarantees a multi-genre musical journey that’s both eclectic and magically cohesive.”

Mariachi band Flor de Toloache breaks the gender barrier as an all-female mariachi band. Their backgrounds are also far more diverse than any other mariachi band, with ancestries that are German, Puerto Rican, Italian, Mexican, Cuban, Australian, and Dominican. Named for a magical flower used to make a legendary love potion, the soulful band sings in Spanish and English while transcending culture and gender by forging new paths for mariachi music.

NPR said of their latest release, Las Caras Lindas, “There should be fireworks named after this band, for all the intensity and color and life that bursts forth from Flor de Toloache.  These mariachis have moxie.  They don’t just sing; they could blast their mountains with their wails and melt glaciers with the warmth of the gorgeous harmonies.”

“This is a triumphant way to end our Hecho en Las Américas series,” said Thor Steingraber, Executive Director of The Soraya. “Not only do both groups seamlessly blend a host of musical cultures, they both have underlying currents of enacting social change through music.  Whether it’s Quetzal promoting activism through their music or Flor de Toloache disrupting the macho Mariachi culture.”

Single tickets beginning at $33 are now available. For more information or to purchase tickets, visit www.TheSoraya.org or call 818-677-3000. Younes and Soraya Nazarian Center for the Performing Arts is located at 18111 Nordhoff Street, Northridge, CA 91330.  Ticket prices subject to change.

About Quetzal
Quetzal is an ensemble of highly talented musicians, joined for the goal of creating good music that tells the social, cultural, political, and musical stories of people in struggle. Martha Gonzalez (lead singer, percussionist, and songwriter) calls it an «East LA Chicano rock group,» summing up its rootedness in the complex cultural currents of life in the barrio, its social activism, its strong feminist stance, and its rock and roll musical beginnings. Besides being a rock band, the group and its members participate in a much larger web of musical, cultural, and political engagement.

Quetzal’s approach to music is influenced by much more than the East L.A. musical soundscape of Mexican musica ranchera, salsa, Chicano Rock, R&B, and international popular music. For members of Quetzal, music expresses the ultimate struggle for dignity. In lead singer Martha Gonzalez’ words, «part of being in the band is having a Chicana feminist analysis. The presence of women in the group is not ‘eye candy’ or a tokenized gesture toward balancing any sort of gender scale: it’s an honest recognition of the poetic, musical, and compositional strengths the female musicians in the community possess.»

The group Quetzal emerged out of a particularly contentious time generated by events such as the 1992 Los Angeles uprising, the 1994 Proposition 187 campaign (to deny medical and public services to undocumented immigrants and public education to undocumented children), and the repercussive reach of the Zapatista insurrection in Mexico. These events spurred a powerful synergy, in which avenues of expressive culture such as music and public art emerged as platforms from which to voice marginalized people’s desires, opinions, and resistance to the conditions in which they found themselves. The proactive strategy of Quetzal and other artists was to maneuver through the societal problems that were affecting the communities in which these artists were living. As a prominent force in this East L.A. creative culturescape, Quetzal vividly portrays how music, culture, and sociopolitical ideology come together in a specific place. About Mariachi Flor de Toloache
Latin Grammy winner Flor de Toloache make New York City history as its’ First and Only All­-Women Mariachi Group. Founded in 2008, Flor de Toloache is lead by singers Mireya I. Ramos & Shae Fiol. Reminiscent of the early days of mariachi the group started as a trio, Harp, Violin and Vihuela. Today, Flor De Toloache performs as a full Mariachi ensemble. The members hail from diverse cultural backgrounds such as Mexico, Puerto Rico, Dominican Republic, Cuba, Colombia, Germany, Italy and the United States. This defines their unique flavor and sound. The result of this cultural bouquet is an edgy, versatile and fresh take on traditional Mexican music. They coalesce as would a band of sisters, with a grace and vibrant beauty that casts a spell over their audiences not unlike the legendary Toloache flower still being used in Mexico as a love potion. While working to preserve centuries old traditions of Mariachi, their melange of the traditional and the modern pushes the boundaries of the genre and brings Mariachi music to new audiences.

Over the course of the last few years, Flor de Toloache’s performances have illuminated world renowned stages in Europe and India. In 2015 & 2016, the group embarked on an extensive European and U.S tour as the opening act of Black Keys’ singer Dan Auerbach’s new band, The Arcs. After performances to sold out audiences in the UK, Germany, Holland, Italy, France, they continued to captivate crowds in the U.S. at legendary venues such as First Avenue in Minneapolis, The Vic in Chicago, Terminal 5 in New York, DC 930 Club and Nashville’s Ryman Theater (The Grand Ole Opry) and Coachella. In 2017 Flor de Toloache just completed a beautiful tour with Cafe Tacvba throughout the US. The ladies will finish out the year with a celebratory Day of the Dead tour with Grammy winning act  La Santa Cecilia and Mexrrissey and share the stage with Natalia Lafourcade, Mon Laferete, Carlos Rivera and Gaby Moreno at the House of Blues in Anaheim, CA.