Segerstrom Center for the Arts presents Brilliance! – A Night of Music and Light on the Julianne and George Argyros Plaza 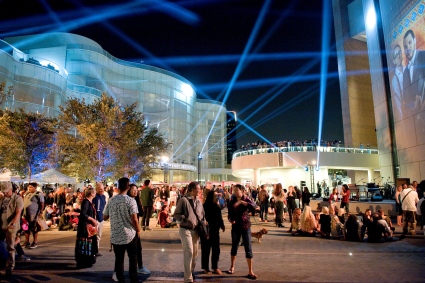 COSTA MESA, CA – LET THERE BE LIGHT! on Segerstrom Center for the Arts’ Julianne and George Argyros Plaza this Saturday, April 21. The Center presents Brilliance! – A Night of Music and Light.  The Center is encouraging guests to gather family and friends of all ages to don their favorite light-up and glow-in-the-dark fashion statements to help transform the Argyros Plaza into a sensory feast of light, color and music!

Santa Ana electronic artist Dulse kicks off the evening’s magic at 7 p.m. The spotlight hits the Argyros Stage and De Lux promptly at 8:30 p.m. LA’s popular post-disco dance-punk DIY duo that sounds like they could have come out of 1979 or 1982 just as eaily as 2018 will be on hand until 10 p.m.

Snap a one-of-a-kind photo in Brian Stocker’s Light Painting Photo Booth – definitely not your standard Kodak moment! Embellish your face with luminescent paint designs and wander through the Blacklight Forest. Local innovators Summit Technology Laboratoy (UCI) will be premiering prototypes of lasers on the Interactive Veil, the Mediaquarium and 3D projections in Design Your Vase.

The Plaza’s Center 360 ‘Glow Bar’ will be open for snacking and beverages. And, at the end of the night, drive home safely with Uber. First-time users, enter the promo code «SCFTA» and get up to $15 off your ride!

After establishing a sound on their 2014 debut Voyage and establishing an identity with the revelatory Generation, L.A. disco-not-disco duo De Lux took a moment to re-center and come back leaner, sharper, clearer and deeper on their new More Disco Songs About Love. Now that co-founders Sean Guerin and

Isaac Franco know how to play and what to say, they’re ready to just get lost in the music. As the band puts it: “We like to say Voyage was our baby, Generation was our baby all grown up and More Disco Songs About Love thinks growing up sucks and just wants to party smart.

Voyage revealed De Lux as an outfit matching post-punk sentiment and the-sociopolitical-is-personal perspective to joyfully indulgent analog synthesizer soundscapes and a deliriously transportive musical joy. 2015’s Generation added an almost-documentary aspect to their dance music, delivering clearly personal stories of anxiety and aspiration. And 2015 also saw their first major festival appearance at Bonnaroo, the prelude to their hotly tipped Coachella debut in 2016 and then sharing a bill with Arcade

Now More Disco Songs is a stream-of-consciousness tour through De Lux’s reality. (With New York City dance-punk legend Sal P. of Liquid Liquid and the Pop Group’s maniacal Mark Stewart as guests, of course.) Though the title might seem like some kind of clever reference, it’s really simple and direct. The disco is the sound—in the most innovative way, of course—and the love is the sentiment: “It’s all literal to us but we realize that it might not be for others,” they say. “We like the idea of giving listeners something to question. But there’s love in there.”

Segerstrom Center for the Arts is an acclaimed arts institution as well as a beautiful multi-disciplinary cultural campus. It is committed to supporting artistic excellence, offering unsurpassed experiences and to engaging the entire community in new and exciting ways through the unique power of live performance and a diverse array of inspiring arts-based education and community engagement programs.

The Center presents a broad range of programming for audiences of all ages, including international ballet and dance, national tours of top Broadway shows, jazz and cabaret, contemporary artists, classical music performed by renowned chamber orchestras and ensembles, family-friendly programming, free performances open to the public from outdoor movie screenings to dancing on the plaza and many other special events.

Segerstrom Center is a leader among the nation’s performing arts centers for providing education programs designed to inspire young people through the arts. The Center’s programs reach hundreds of thousands of students each year in five Southern California counties. Community engagement programs developed through the Center for Dance and Innovation and Center Without Boundaries also connect the

Center more comprehensively with Orange County’s many diverse communities. The CDI supports flagship artistic programming and a wide range of projects that celebrate innovation, nurture creativity and engage audiences of the future. It is home to the ABT Gillespie School and the School of Dance and Music for Children with Disabilities. The Center Without Boundaries develops partnerships with noncultural organizations to help them in their own efforts to respond the ever-changing needs of the community.

In addition to Segerstrom Center for the Arts as a presenting and producing institution, it also identifies the beautiful 14-acre campus that embraces the Center’s own facilities as well as two independently acclaimed organizations: Tony Award®-winning South Coast Repertory and a site designated as the future home of the Orange County Museum of Art.

BRILLIANCE! – A NIGHT OF MUSIC AND LIGHT