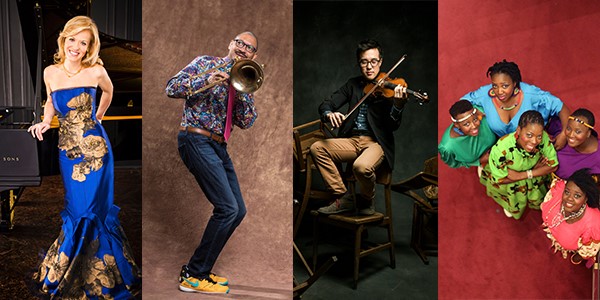 Aliso Viejo, CA – Soka Performing Arts Center is pleased to announce some highlights of the upcoming 2018-2019 season which begins in September. Series packages go on sale June 12, and single-event tickets go on sale July 10. Further details will be announced in early June with information available then on PerformingArts.Soka.edu. “The 2018-19 season looks to be one of the most exciting yet,” notes General Manager David Palmer. “We have six outstanding pianists lined up for our symphony and chamber music series, Grammy-nominated jazz artists, world music artists from Taiwan, Zimbabwe, and Chile, and so much more.”

The Touring Symphony Series for the 2017-18 season is comprised of two outstanding orchestras. The series begins in September with the Boston-based chamber orchestra A Far Cry and will feature pianist Simone Dinnerstein performing two selections by Bach and a piano concerto by Philip Glass composed specifically for A Far Cry and Simone Dinnerstein. April brings the Royal Scottish National Orchestra to Orange County with the US premiere of a new work by composer Paul Chihara, as well as pianist Olga Kern as the soloist for Rachmaninov’s Variations on a Theme of Paganini. An audience favorite, Pacific Symphony’s conductor and music director Carl St.Clair brings his vast knowledge of musical history to life with both his comments and baton in the latest version of Sundays @Soka with Pacific Symphony Series, performing works by Mozart, Schubert, and Chopin.

The Chamber Music Series features five outstanding pianists this year. Solo piano recitals have become one of the hallmarks of the Chamber Music Series at Soka Performing Arts Center. This year piano soloists will include Daniel Hsu, bronze medalist at the 2017 Van Cliburn International Piano Competition; Olga Kern, gold medalist at the 2001 Cliburn; and a special co-presentation with the Philharmonic Society of Orange County by acclaimed pianist Sir András Schiff. Violinist Simone Porter will perform a recital with pianist Hsin-I Huang in January, and the Alexander String Quartet will be joined by pianist Joyce Yang for an entire program of piano quintets in April. Olga Kern joins us for a third time this season performing the Shostakovich Piano Quintet in G minor with the Dali Quartet.

Kicking off the World Music Series is A Moving Sound, an award-winning Taiwanese ensemble that features a joyous mix of traditional and original music and dance from Taiwan, China, and neighboring Asian countries. November brings Nobuntu, the female a cappella quintet from Zimbabwe internationally acclaimed for its inventive performances that range from traditional Zimbabwean songs to Afro Jazz to Gospel. While her music is rooted in Chilean folk traditions, singer-songwriter and acordeonista Pascuala Ilabaca deftly weaves strands of jazz, pop, rock, and other influences into the mix for her performance in March. Rounding out the series will be the Firebird Balalaika Quintet performing traditional Russian and Eastern European songs on traditional Russian instruments.

The Pop Classics Series is back for round two with Live in Central Park [Revisited]: Simon & Garfunkel, a recreation of the now legendary reunion of the folk duo. The sixties-era folk favorites the Kingston Trio have renewed themselves with three-part harmonies led by founding member Nick Reynolds’s son Josh. Also returning for the second year is the TenPints New Music Series with up-and-coming artists in a variety of contemporary genres, curated by TenPints Entertainment. In the fall, singer-songwriter and multi-instrumentalist Graeme James brings his brand of folk and celtic music all the way from New Zealand. Korean violinist-looper Joe Kye draws upon his migrant upbringing to create a blend of indie-rock, jazz, classical, pop, and world folk for a unique and fun concert in March.

The season will also include special engagements by Hawaiian guitarist Barry Flanagan of the group Hapa; Ensemble Galilei performing their latest multi-media show, Between War and Here; the return of International Guitar Night featuring four of the finest guitar virtuosos from around the world; and an intimate evening with finger-style guitarist Muriel Anderson.

Those who purchased 2017-18 season series packages will be able to renew their packages beginning May 8. For new buyers, packages will be available for sale starting on June 12. Single-event tickets for all scheduled events will go on sale on July 10. At that time, the Create Your Own Series packages will also be available for those patrons who like to mix and match their musical genres and styles. Just select a minimum of four events to receive discounted ticket prices for an entertainment package of your own design. Community Connections events are not available for inclusion within Create Your Own Series packages, or for any Soka discounts or vouchers. Call the Box Office with any questions at (949) 480-4ART (4278).